F Scott Fitzgerald’s renowned tale of the glitz and glamour of the Jazz Age comes to the stage in a captivating musical adaptation, having enjoyed successes as a sell-out concert at Crazy Coqs in Piccadilly, an online streamed concert performance at Cadogan Hall, and a five week run at Southwark Playhouse over December 2021 to January 2022.

It is late December 1929. Winter. Does the end of the Jazz Age and prohibition signify the end for celebrated New York Speakeasy ‘Luna Park’? We watch the new decade quickly approach as the story unfolds through the eyes of Daisy Buchanan. It has been seven years since she last saw Gatsby, yet the past lingers. Their illicit romance was a cocktail of adoration and complications that needs to be confronted so she can move on, so she bravely returns to the dangerous world she once left behind. Meeting a carnival of characters, including notorious gangster Woolfe, Daisy approaches her past by reliving the dream she shared with Gatsby. But who is she really? And where is Gatsby?

This original retelling of Fitzgerald’s classic novel pivots the focus to Daisy, with references to the real woman that inspired her character; his wife, Zelda Fitzgerald. Written and directed by Linnie Reedman, with original compositions by Joe Evans, the story switches between the beginning of the 1920s to the turn of the decade, while Fitzgerald’s fantastical characters play out the drama of the novel. With elegant pace, a smoky jazz score and garnished with wry humour, Gatsby: The Musical revels in the decadence of the period.

Vibrant characters, decadent music and infectious rhythms collide with personal conflicts and lost loves. This production is a fresh understanding of characters and a story made compellingly relevant to today. Themes of loss and disappointment are intertwined with a sense of hope for a better tomorrow, and a green light that keeps us reaching out. Gatsby: The Musical is now resonant with the Roaring Twenties we find ourselves in once again. 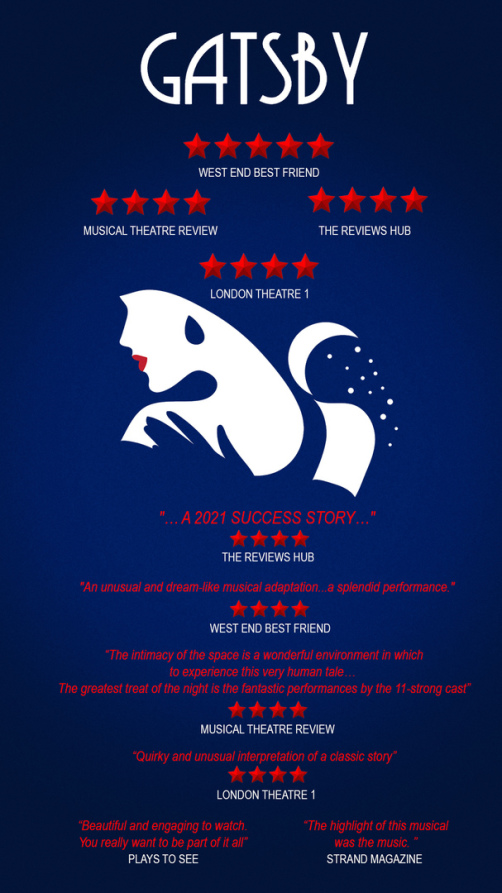 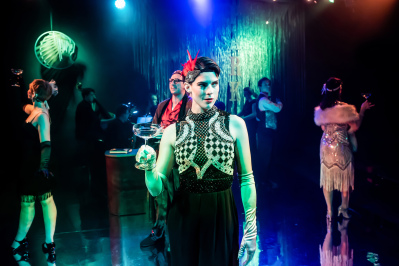 Think of  ‘Gatsby’ and you think of glitz, glamour, parties and the roaring twenties, champagne flowing, cars and bars and the american dream

‘Gatsby’ the musical speaks to us in a very different way. It uncovers what lies beneath, and beyond, Instead of just seeing the twinkling lights of a fairground, tempting and seductive, it shows what happens when the gloss fades and reveals the sweat, and the life - the flip side: the yearning to find the glitter and glamour of what always lies just out of reach, with the idea that life has to be lived and enjoyed to its utmost.

Set in a beautiful art deco world caught between the horrors of the great war and the great depression. a world where telephones, fashion, automobiles, planes and advertising seemed suddenly to make everything possible; where indeed the new tunes seemed to promise everything, and to create the concept of a fragile American dream

“The Great Gatsby” cries out to be a musical. The whole idea of a musical set in the jazz age where F. Scott Fitzgerald writes about songs setting the rhythms, and of people’s lives being dictated by the moods of these songs is irresistible. his poetic prose is a gift

Praise for previous productions of Gatsby:

“…This musical adaptation of F Scott Fitzgerald’s novel grips throughout…”

TIME OUT – SHOW OF THE WEEK

THE MAIL ON SUNDAY

“Joe Evans’ smoky, jazzy score conveys the hope and glamour of the era, shrouding the insecurities, secrets and sadness below the glitzy surfaces of the characters”

“… A glamorous and engaging way to experience the story unfolding…”

“…Within a matter of minutes, I was enthralled…”

“…we find ourselves seeing Gatsby et al in a new light…”

From Page To Stage

“…Gatsby the Musical is a delightful and emotional show which puts a new spin on F. Scott Fitzgerald’s characters and is fully deserved of a staged performance once theatres reopen…”

“… Joe Evans’ score, arranged and orchestrated by Henry Brennan, includes a great mix of musical styles, including ballads, jazz, swing and ragtime. There are some brilliant songs brought to life by the talented band, such as Starlight and Wine, Seize The Day, and the beautiful Broken Wings, Broken Dreams…”

Arranged and Orchestrated by – Henry Brennan

GATSBY: The Musical is traditionally staged with a cast of 11, though with some doubling can be reduced to 7 or 8. The music is orchestrated for piano, double bass, tenor saxophone, clarinet, violin and drums/percussion.