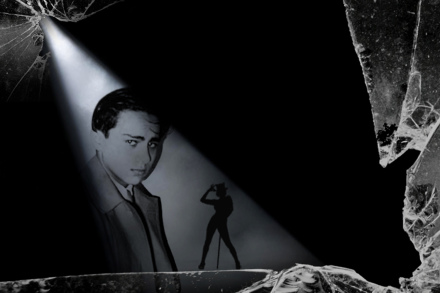 is a radical new musical workshop, based on the true story of a teenage assassin.

It is 1938. A young Jewish refugee, Herschel Grynszpan, walks into the German embassy in Paris and shoots a German diplomat. He is arrested and spends the next four years in prison. When the Nazis march into Paris, they capture Herschel and send him to a camp in Berlin. Herschel has a choice: to be paraded in front of the world’s press as a celebrity scapegoat; or to confess to the truth – and to lift the lid on, not just his own sexuality, but the scandal that has infiltrated the Third Reich!

Herschel has an important story to tell. So far, he has only known prison and cabaret bars. And one love affair… with the enemy. Can he tell his story? Could this be the show-trial of his dreams? Or will the Third Reich try to bury the true facts to avoid a scandal at all costs?

Herschel, a Jewish teenager, went from refugee to assassin to puppet of Nazi propaganda. By the age of seventeen he was perhaps the most famous Jew in the world. The morning of November 7, 1938, Grynszpan bought a gun and went to the German embassy in Paris. He wanted to make a point the world couldn’t ignore: a statement about the treatment of Jews at the hands of the Nazis. The assassination was used by Joseph Goebbels – minister of Propaganda – as justification for the violent riots of Kristallnacht. Did the young Herschel manage to thwart the Nazis’ plan? Was it, after all, a desperate crime of passion? It is alleged that Herschel had a gay relationship with his victim. Why did he vanish without trace? Without a trial? And is it time for his story to be brought into the spotlight again?

Written and directed by Linnie Reedman, it is being presented as a workshop performance in the studio of The Other Palace, following a successful showcase at Above the Stag. The production is the result of Reedman’s extensive research into true facts, which she mixes with a fictionalised account of what may have happened. The explosive themes still resonate today.

The Strange Affair of Herschel Grynszpan